We live in a world of extremes, where superlatives are the expected norm and the quest for quality or simple improvement has been replaced by an expectation of disruption. Companies are not just expected to do well, to be profitable and provide share-holder value – they need to become unicorns. Messages are not only evaluated on re-call and acceptance, but on reach over the shortest possible time, and going viral has replaced sustainable market entry and penetration. “Innovate or die” has become the mantra of the business world. But what makes the new an innovation?

And before you go all George Orwell on me, let me assure you that this is merely a coincidence.

There was nothing nefarious going on in my life, I was not living in some mad Utopia, with Big Brother breathing down my  neck.

I was 14, living in London (actually, come to think about it, in the mid-80s London was a bit of a crazy Utopia, at least around Picadilly Circus, with the punk scene living side by side with old London Establishment…), and I was a bit of a nerd.

My hero at the time was Sir Clive Sinclair, who had previously given the world (at least my world) the greatest toy ever, the Sinclair ZX Spectrum, and who had just announced a revolutionary vehicle to a captive, but mostly laughing audience, the Sinclair C5, an electrically assisted pedalled vehicle.

It looked like the three-wheeled love-child of a Honda Goldwing and a plastic Go Kart, its maximum speed was 15 miles per hour, it handled like a bob-sled on wet sand and the mere thought of sitting in traffic with your head on one level with the bonnets of most cars or the exhaust pipes of lorries and buses was enough to terrify most people. In short, it was a total disaster.

coolest thing any of us had ever seen. It was a hand-held device with a monochrome screen, about the size of a large notepad. It came with a calendar, an address book, a programme for jotting down notes, a scaled down word processor and spreadsheet and a rudimentary mail client … and it recognised your handwriting when you used the stylus that came with it and turned it into print. It was the first device to introduce the term “Personal Digital Assistant” (PDA). It was the Apple Newton. And it was discontinued in 1998, by order of the late Steve Jobs.

We have iPhones the size of notepads and iPads, which now use a stylus, called the Apple Pencil, which we can use to write on the screens of hand-held devices, featuring calendars, contacts, browsers, word processing and spreadsheets (and lots more, of course). They are everywhere, and everybody and his uncle has one.

My local pizza shop delivers its products with the help of a fleet of Renault Twizzys, little electric vehicles, made of a low chassis (albeit on 4 wheels, not 3) with a plastic and fibreglass dome and rudimentary side panels. It goes 28 miles per hour and is considered a cool contribution to the “zero emissions” movement.

So in a nutshell, it’s taken us 30-odd years to accept and realise the idea of a silly-looking electric multi-wheeled vehicle for urban transportation and about 20 years to come up with a stylus-driven hand-held, which we actually like and adopt on a broad scale (with the possible exception of the Palm Pilot, may it rest in peace).

So what is the difference?

As a wise man once said, “time is what keeps everything from happening at once.”¹

And time gives us timing, which is the art of understanding the proper sequence and rhythm of things. As for most things in life, understanding when the time is ripe for a good idea to go to market, is just as important (or even more so?) as actually having the idea. In 1962 Everett Rogers, American communication scientist and serious disruptor of the status quo, wrote his book “Diffusion of Innovation.” In it, he describes the requirements for the successful diffusion of any innovation: the innovation itself, a compatible social system, communication channels – and time.

So is the success of the iPad and the Twizzy and all those other brands that have recently had significant impact on our world (think Uber, Instagram, Airbnb, etc.) just a question of better timing? 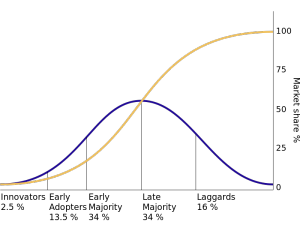 In a way, yes. Not because they came out at the right time (though that also played a part – coming back to Mr. Rogers, let’s not forget that social systems are also subject to time and evolution, so there is such a thing as a better time), but because they managed to reduce time. The time it takes to go from addressing and on-boarding the innovators and early adopters to getting the buy-in of the late majority and, ultimately, the laggards.

(Graphic: The diffusion of innovations according to Rogers. With successive groups of consumers adopting the new technology (shown in blue), its market share (yellow) will eventually reach the saturation level. The curve is broken into sections of adopters. – Source: Wikipedia)

Of course, there are many other factors that also help drive this acceptance: Availability, usability, value perception, to name a few, but ultimately, timing needs to be right. There has to be a recognised (or at least recognisable) need and a solution to match, coupled with social awareness and social acceptability. And the whole thing must be able to scale up quickly, to shorten that span from innovation to broad majority. However, the problem with time is … well that it just is. So maybe the goal should not be to create something disruptive. Maybe – and this is what I tell my clients – we should just focus on creating something good, something appropriate, something that will actually add value, rather than add to the ever-growing pile of me-too projects and products. And if this then creates disruption … you can sit back and congratulate yourself on an unexpected side benefit.